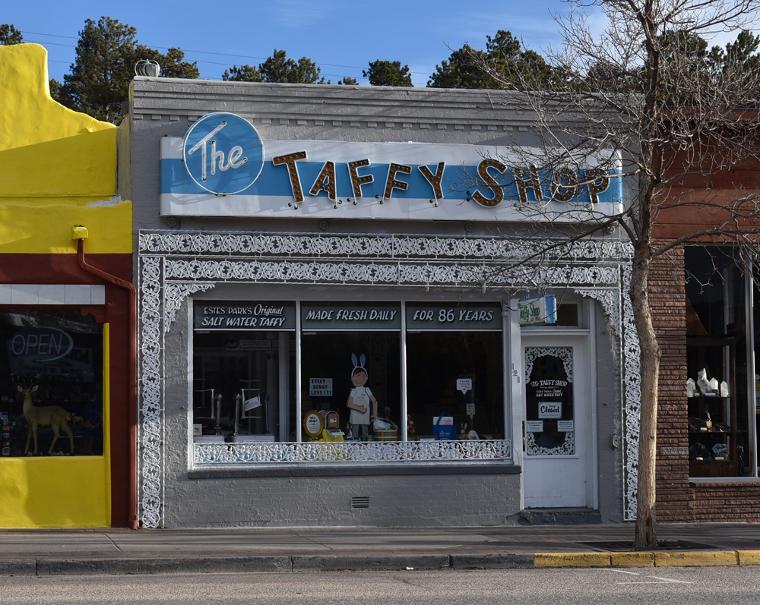 Originally built in 1904 as home to the Fall River Hand Laundry operated by Mrs Hix, and owned by Charlie Hix. After the laundry service, Jes Poling's Electric Whirlpool Appliance Store moved in. In 1956 the building to the East (right) burned to the ground and Jess Poling bought that lot and moved his appliance store there. Charlie Hix owned this property at the time, and asked The Taffy Shop owner Lowell Slack to move in from next door where The Taffy shop was originally located (in the Pueblo Building) so he moved into this building in 1957 and has been here ever since. Confusing? Both tenants moved one space East after the Sherwood fire.

In 1960, the spectacular electric sign and fancy ironwork were added to the storefront to commemorate the 25th anniversary of The Taffy Shop®. In 2015 the second family to own the store restored the electric sign back to it's original glory. The sign was shut down by Town government shortly after it was restored because the lights 'flashed'. A year later, The Taffy Shop sign was issued the first 'Historic Sign Permit' which made the twinkling lights legal again to the delight of customers from decades past and today, and remains a must see during the evening hours when it is illuminated for a few hours at twilight.

Current use
The Taffy Shop